T. V. serials are considered to show content that influenced society in a negative way but this is not always true. Some T.V. serials can change someone’s life direction and inspire positively. Mount Everest was a serial telecasted on star plus that inspired city’s young girl, Manisha Payal for summiting Mount Everest. While watching the serial, she decided if the girl in the serial can climb the peak, why can’t I?

Early Life of Manisha Payal
Born in the year 1994, Manisha Payal completed her Bachelor's degree in Biomedical Engineering in 2017 and a Masters in Business Administration from G.J.U. in 2019. Presently she is serving as Trainer in the NCC wing of G.J.U.

Life of Being Mountaineer
Getting inspired by a TV serial in the year 2015, when she decided to climb Everest; she encountered stiff opposition from her family and relatives. They laughed at her and said the focus on your studies and get placement. This opposition was not able to reduce her motivation, with more determination and dedication, she completed every step so as to fulfill her dream of summiting Everest.
Finally, in the year 2017, she was able to convince parents for mountaineering training and get enrolled herself at Himalaya Mountaineering Institute, Darjeeling. In May 2018 she did her Basic Mountaineering Course with A‟ Grading and in the November same year, she did Advance Mountaineering Course from the same Institute, also with „A‟ Grading.

In January 2019, she completed her first expedition to Mount Kilimanjaro. Among 21 Indian members, she was the only woman member in the team. On January 26, she was at the top of Mount Kilimanjaro with Indian Flag in hand, saluted Prime Minister and sang National Anthem there. She created history and recorded her name in Limca Book of Records. But summiting Mount Everest was still a dream which she completed in the month of May the same year.

In her group of four expeditors, she was the only female member this time too. Firstly, Manisha Payal flew to Kathmandu with her team and from there; they started their journey of achieving the impossible. Exciting as it may sound, but the journey was not easy. Some team members left the summit because of harsh weather conditions and medical problems. Instead of all obstacles, Manisha was determined to achieve the summit. On 22nd May 2019, struggling with the height and snow, wounded body, and had no Sherpa, Manisha Payal finally reached the Mount Everest and achieved her dream.
The next dream target she has taken is to summit Mount Elbrus in Russia during June. 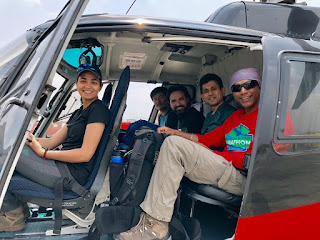 Q: What advice you will give to dreamers who want to climb Mount Everest?

I always believe that the way I achieved my dream to climb Mount Everest, anyone can do it, but one has to be focused. Like I got my inspiration from a TV serial, you can also get inspiration from anyone.
In unfavorable conditions, Mount Everest stands tall and rigid. In the same way, you should also be strict about your dream and must have the strength to face every obstacle. It will be your hard work, determination, dedication, a focused vision that led you to be a good and successful mountaineer. Be committed to your goals and never take short-cuts to have a successful life.
Education should not be a secondary option for a mountaineer. Try to complete your target along with education. 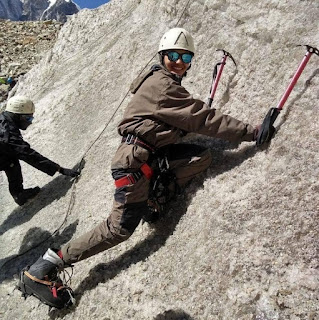